Dr. Ron Miller was first introduced to the idea of doing mission work by Chuck Rutter (CRNA) while fishing together in Canada. Chuck encouraged Dr. Miller to give it a try.

In 2004, he did and 16 years later he is still providing eye care to the people in Honduras.

The Miller team consists of a surgeon (Dr. Miller), anesthesia support, operating room personnel, most of whom have worked with him in the USA or have known former trip members. He has even trained those who are interested but have no ophthalmological or surgical experience, to assist him, with the end result that the trip has always been a wonderful experience for them. Dr. Mikel, a physician, has joined the team numerous times providing general medical care in the clinic and one year was Dr. Miller’s surgical assistant.

In recent years, the eye team has joined with the Jensen Medical Mountain Ministry team for a few days in the mountain villages where there is no medical care. In the mountain village, the small Miller eye team sets up in a separate room, usually in a school, and they do vision screening, give away glasses, and treat eye allergies and infections. If there is someone who needs eye surgery, they are referred to the Hospital later in the week so Dr. Miller can provide the care needed. The team usually sees around 150 patients in a 2-3 day period.

On my first mission trip in 2004, on the first morning in the clinic, a young man was led into the exam room where Cindy and I were.  He had pure white, mature cataracts in both eyes.  With the help of the translator, he and his father said the cataracts had been present as long as he could remember.  Asking again, he said he might remember seeing as an infant. This was an important detail as never seeing at all means the brain never hooked up to the eyes. We took him to surgery that afternoon and removed one cataract.  The patch came off the next morning and his father, hat in hand, was standing next to him.  The young man began to cry and said it was the first time he had ever seen his father’s face.  We did the other eye that afternoon.

Too much impossible coincidence:  He was 33 years, the same age when Jesus Christ began his ministry, and the young man’s name was Jesus. 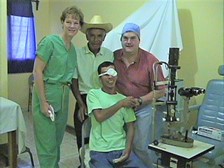 On another trip, a little girl came into the clinic with strabismus (cross-eyed) since birth. Her surgery was done in the morning and her life was changed… 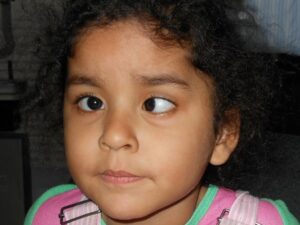 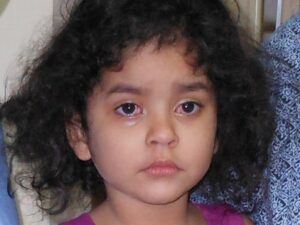 You will be redirected to